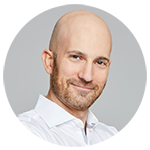 Jeff is an active angel investor and startup advisor, as well as serving on numerous public and private Boards of Directors. He also formerly served as an officer in the Auxiliary Unit of the New York Police Department. Jeff is the author of The Birthday Rules and The End of Jobs: The Rise of On-Demand Workers and Agile Corporations. Jeff frequently speaks at conferences and in media on startups and labor issues.

Jeff holds an MBA from Harvard University and an MS and BS from Cornell University.
Speaking At
The End of Jobs: The Rise of On-Demand Workers and Agile Corporations – Part I
Close